MAY 18, 2018 - BOSTON – Denise Fitzgerald, Manager of Legal Research Services, was a late addition to the child support panel at the 2018 MCLE Family Law Conference. Fitzgerald made a big splash at the conference anyway, once the program began. Fitzgerald provided attorneys in attendance with a sneak preview of a radically redesigned 2018 Child Support Guidelines worksheet that fixes several glitches in the original 2017 worksheet while dramatically re-organizing a familiar format that had undergone only minor tweaks in the last two decades.

Download and use the amended 2018 Child Support Guidelines Worksheet HERE .

Prior to Fitzgerald’s addition, the MCLE panel was scheduled to focus on three errors in the 2017 Guidelines that had been the focus of extensive coverage in the Massachusetts family law blogosphere. Original panel members Jason V. Owens of Lynch & Owens, Gabriel Cheong of Infinity Law Group, and Justin L. Kelsey of Skylark Law and Mediation – whose blogs’ combined readerships number in the hundreds of thousands per year – had blogged about the 2017 Guidelines glitches extensively, leading to coverage in Massachusetts Lawyers Weekly, and a subsequent promise from the Trial Court to address the issues in October 2017.

Fitzgerald’s release of a 2018 Child Support Guidelines worksheet – which not only fixes the glitches, but reworks the entire calculation form – turned the usually mellow MCLE conference into a source of breaking news. Fitzgerald admitted that fixing the glitches identified by the family law bloggers meant that the new worksheet would result in different child support calculations in many cases, especially those involving a mix of children under 18 and over 18.

Midway through the MCLE conference on May 18, 2018, the Trial Court posted a press release explaining the features of the new worksheet:

Trial Court Chief Justice Paula M. Carey today announced the promulgation of amended child support guidelines and guidelines worksheet, which take effect on June 15, 2018. These amendments are a result of a Trial Court review conducted after issues were raised regarding the application of the adjustment factors for children 18 years of age or older, and the adjustment for child care, health care coverage, and dental/vision insurance costs when parents share financial responsibility and parenting time approximately equally.

The press release indicated that along with the new worksheet, a memo from the Court’s economist, Mark Sarro, Ph.D., along with the 2018 Child Support Guidelines, would be available within a week:

The amended guidelines and the fillable worksheet will be posted on mass.gov on May 22nd. A memo from an economic consultant that explains the adjustment factors in detail will also be posted on May 22nd.

Page 3 of the 2018 Child Support Guidelines summarize the changes from the 2017 Guidelines as follows:

In the June 2018 amendments, the Trial Court revised the age adjustment factors in the worksheet to eliminate counterintuitive outcomes in support orders for four or five children, at least one being 18 years of age or older. The Trial Court also redesigned the worksheet so that one worksheet can be used regardless of whether the parenting plan is shared, split, or approximately 2/3 and 1/3. It is no longer necessary to use multiple worksheets to determine the child support amount where there is shared or split parenting plans. The June 2018 amendments do not address the 2018/2019 changes to the federal tax code with regard to alimony and dependency exemptions.

Attorneys and Public Have Until June 15, 2018 to Experiment with New Child Support Worksheet

Fitzgerald told the crowd that the 2018 Guidelines worksheet is “final”. However, by providing attorneys and the public a three-week testing period before activating the new worksheet, the Trial Court can avoid a repeat of last September. Last summer, a draft of the 2017 Guidelines was released in July of 2017, but the court’s official worksheet was not finalized until a week before the guidelines became official on September 15, 2017. Within ten days, family law bloggers had already uncovered multiple glitches in the worksheet.

As noted by Friday’s MCLE panelists, the 2018 Guidelines worksheet appears to correct the issues identified by the blogosphere, but the changes mean that child support orders entered over the last six months must be re-examined by attorneys, litigants and court staff. “Some child support calculations are going to be different,” Fitzgerald told the crowd.

At Friday’s conference, Fitzgerald and Child Support Task Force economist Mark Sarro, Ph.D. denied that there were “errors” in the original worksheet. One issue, which generated an incorrect child support calculation when specific numbers were entered in the 2017 form, was characterized by Fitzgerald as a “glitch in the formula” in the original worksheet. Fitzgerald told the crowd the remaining two issues were “not errors” but merely “counterintuitive results”. This was echoed in the press release the Trial Court posted minutes before the panel discussion began:

The June 2018 amendments eliminate counterintuitive outcomes in support orders for four or five children, at least one being 18 years of age or older.

Panel member Gabriel Cheong of Infinity Law Group, expressed skepticism about Fitzgerald’s characterization, referring to the glitches as “errors” and telling the crowd that the original worksheet incorrectly doubled a credit for medical and child care expenses in shared custody cases, while miscalculating child support for cases involving a mix of minor and adult children.

Errors or not, Fitzgerald made clear that all three issues were corrected in the 2018 worksheet. The fixes will result in new child support calculations in two major classes of cases: shared custody cases involving significant medical insurance and child care expenses and cases involving parents with a mix of children under 18 and over 18.

Among the big changes in the 2017 Guidelines was an increased financial credit for parents with substantial medical insurance and child care expenses. The 2017 Guidelines provide a more substantial increase in child support for recipient’s paying medical insurance and child care expenses, while providing an additional reduction in payments for child support payers who carry these expenses.

Unfortunately, the 2017 Guidelines miscalculated the credit for medical/child expenses for parents with shared physical custody or split parenting time. In essence, the original worksheet double-counted the medical/child credit, leading to one parent receiving a double credit in shared custody cases.

The 2018 worksheet should fix the double-counting glitch while dramatically streamlining the process in all shared custody cases by performing the child support calculation in a single worksheet, instead of two.

The state’s press release described the adjustment under the new worksheet as follows:

The state’s press release may undersell how the sweeping the amended 2018 worksheet’s changes will be for families with a mix of adult and minor children. Indeed, Fitzgerald confirmed that the new worksheet will result in a different child support calculation for every case involving a mix of minor and adult children compared to the 2017 worksheet. Parents, attorneys and court staff should be especially diligent about recalculating child support using the new worksheet in such cases.

As we have covered in our blog, Massachusetts has so far declined to follow a growing national trend towards making shared physical custody presumptive in cases involving minor children. However, shared custody arrangements are unquestionably on the rise in Massachusetts, as more women enter the workplace and dual-income households are increasingly the norm among married parents.

The requirement of using two worksheets for every shared custody calculation was particularly difficult in cases in which attorneys or parties needed to present multiple hypothetical child support scenarios to judges. Instead of receiving two or three worksheets from each party, judges found themselves receiving up to twelve worksheets that needed to be organized and analyzed. The shift to a single worksheet will be a welcome change in split parenting cases.

The image below shows the evolution of the Massachusetts Child Support Guidelines from 1995 through the 2018 worksheet, which becomes effective on June 15, 2018: 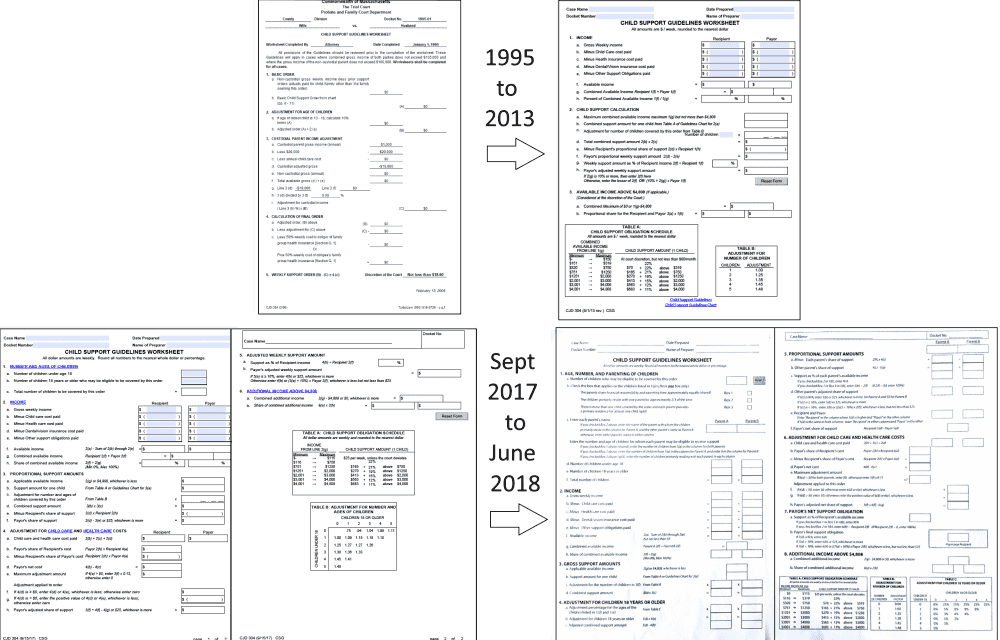 The 2018 worksheet appears to include logical solutions for the additional tasks the Guidelines must now carry out, including the medical/child credit and the 75% child support calculation for children over 18. However, the added complexity poses its own problems, as an ever-increasing number of litigants in Massachusetts Probate and Family Courts are self-represented individuals. The truth is, many attorneys struggle with the math required by the 2017 Guidelines. However, attorneys know where to find online calculators and other resources for performing the needed calculations. Individuals without attorneys are likely to find the new worksheet more challenging than those released previously.

Questions for 2021: Does the Child Support Guidelines Worksheet Need to be Simplified?

When the first draft of the 2017 Guidelines was released in the summer of 2017, we reviewed the big changes under the new Guidelines approvingly. The increased credit for medical/child expenses addressed a specific and pressing problem. The 25% decrease in child support for adult children also addressed a long-time ambiguity under the law that the state’s appellate courts had never clearly tackled. Of course, there is a price to be paid for each of these changes in the form of increased complexity.

Over the next two years, the new Probate and Family Court Chief, Hon. John D. Casey must begin assembling a new Massachusetts Child Support Guidelines Task Force, with an eye towards the 2021 Guidelines. Among the policy considerations, the new Task Force must debate is the simple question of whether the Guidelines Worksheet should be simplified, even if it means eliminating some of the useful tools that were unveiled in the 2017 Guidelines and carried forward to the 2018 Guidelines.

One potential simplification could involve only applying the 25% decrease for children over 18 to cases in which all children have reached adult status. Much of the complexity under the current worksheet involves calculating child support for families with a mix of children under 18 and over 18. If the 25% decrease only kicked in after all children reach 18, the math would become far simpler under the Guidelines.

Similarly, it may be possible to achieve a somewhat generous credit for medical insurance and/or child care costs without the multiple calculations used in the current worksheet. Simplifying the calculation would reduce precision and fairness, but the Task Force must consider the cost of precision in the form of increased complexity.