The House deadline, Hitner says, is making reform advocates sweat, despite the bill’s positive history in the House, including a unanimous 156-0 vote to pass the bill in the House last summer. Hitner says supporters must contact their local representatives and ask them to arrange a meeting to discuss the bill as soon as possible.

“The only way to get this job done is for people to arrange a meeting with their Senator and Representative,” says Hitner. “I can be available to attend any meeting, but this can only happen if constituents reach out to their local senators and representatives. If we met with a legislator this past summer, we need people to call them, remind them of the meeting and ask them to co-sponsor the new bill.” Hitner says the new bill will receive a new number (replacing last year’s H. 4427) and will be entitled “Restore the Legislative Intent of the Alimony Reform Act of 2011”.

The alimony bill appeared to garner substantial public support from state senators running for re-election this fall, including Senator Patrick M. O’Connor (R-Weymouth), however, advocates must now translate this support into co-sponsorship senators and representatives willing to put their names behind the bill in the 2017 sessions. If passed, the bill would close a loophole in the Massachusetts Alimony Reform Act (ARA)that enabled lifetime alimony to continue for spouses divorced before 2012. Enacted in 2011, the ARA imposed limits on alimony awards in Massachusetts, including the termination of alimony when a paying spouse reaches federal retirement age, and the reduction or elimination of alimony when a receiving spouse begins cohabitating with a new partner. 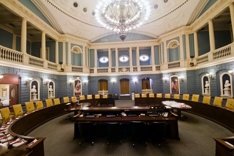 In January of 2015, the Massachusetts Supreme Judicial Court (SJC), entered three controversial decisions in cases interpreting the ARA, ruling that the language of the ARA limited the restrictions based on retirement age and cohabitation to individuals divorced after the ARA’s effective date in 2012. As a result, lifetime alimony continues for many Massachusetts residents who have passed federal retirement age. The new bill, dubbed by some the Alimony Re-Reform Act (ARRA), would make the alimony restrictions based on retirement age and cohabitation applicable to pre-2012 divorces, thereby “evening the playing field” for all Massachusetts litigants.

“Our goal is to get as many co-sponsors as we can to re-submit the Bill H. 4427 introduced last year,” says Hitner, a member of the original Alimony Reform Task Force, whose report formed the basis for the original ARA. According to Hitner, the Task Force recently reconvened to discuss the new bill.

“In an effort to return the Act to the original intent, I was able to convince the Chairman of the Alimony Reform Task Force to gather the group to review the SJC Decisions,” says Hitner. “We met several times and submitted Bill as a ‘’legislative correction” to the misinterpretation of the Act by the SJC.”