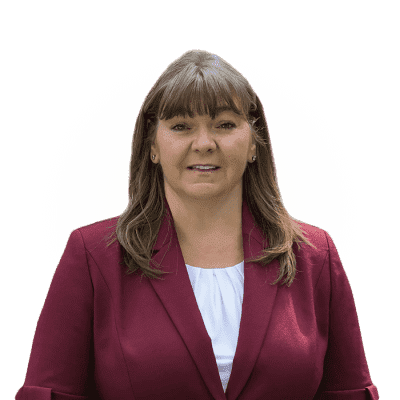 For the first time this year, the 2017 Massachusetts Child Support Guidelines expressly prod and encourage judges to deviate from the Guidelines when the facts of a case suggest a deviation is appropriate. The motivation for this unusual move? Apparently, judges in the most populous counties in Massachusetts are failing to exercise their authority to deviate on a regular basis. As a result, child support cases with facts that require a customized solution are being decided using a cookie cutter approach across Massachusetts.

What Are Deviation from the Child Support Guidelines?

It is inaccurate to call any child support deviation “common”. Most judges are loath to deviate from the Guidelines, since doing so opens the door to argument and litigation in place of structure and certainty. However, there are a few factual scenarios in which deviations are more frequently seen.

As Attorney Levy noted, one big reason that many Massachusetts Probate and Family Court judges avoid deviations is the amount of work involved for the judge:

One immediate take away … is just how much work judges must put into crafting findings and orders for deviations under the Child Support Guidelines. Massachusetts Probate and Family Courts are the busiest, most overburdened and most underfunded courts in the Commonwealth. Judges with limited time and resources must pick and choose which cases on which they will expend the precious time required to draft a thoughtful and time-consuming order and findings for deviation.

Another characterization of deviations can be found in the 2016-2017 Economic Review of the Child Support Guidelines, which described deviations as follows:

As part of its rollout of the 2017 Child Support Guidelines in July, the 2016-2017 Child Support Task Force produced extensive research supporting Attorney Levy’s observations about the hesitancy of Massachusetts judges to deviate from the Guidelines. As discussed in more detail below, the Task Force concluded that judges in the most populous Massachusetts counties deviate from the Guidelines less frequently, while judges with lighter caseloads in less populated counties deviated from the Guidelines more often. The Task Force believed that judges in less populous counties had the time to explore individual cases and customize their child support orders as needed, while judges in busier courts were constrained to a cookie-cutter approach by time and resource constraints.

The 2017 Guidelines tweak the list of specific grounds for deviation found in Section IV (B):

Many of the grounds for deviation above are carried forward from the 2013 Guidelines. However, there are meaningful changes. For example, the requirement under grounds No. 1 that “the Court determines the agreement to be fair and reasonable” adds a new level of scrutiny, where judges historically have restricted findings of “fair and reasonable” to divorce agreements, and have not applied that standard to child support agreements between unmarried parents or modification agreements. The repeated need for special circumstances to include “financial consequences” is also new, and appears intended to limit deviations based on non-financial grounds. Grounds No. 7, regarding “a child care cost that is disproportionate in relation” to a parents’ income is entirely new. Grounds No. 8, which provides that a deviation increasing child support may be appropriate when “a parent provides substantially less than one-third of the parenting time for a child or children”, now includes the word “substantially”, suggesting that parents with at least 20% of the parenting time are less likely to be subject to an upward deviation in child support.

In its comments, the Task Force provided some insight into how the new deviations section was formed.

The Task Force clarified in the first phrase of Section IV. B. that it is permissible to deviate to an amount below the presumptive guidelines amount. Because the deviation circumstances affect an ongoing child support award, rather than a one-time or occasional allocation, the Task Force emphasized that certain circumstances must be ongoing and with financial consequences for them to be considered appropriate for a deviation. In Section IV. B. 8., the Task Force added “substantially” to emphasize as it did it Section II. D. that a parenting plan that is in the best interest of the child is the first step in determining a child support order. The inclusion of “substantially” provides a parameter with the goal of reducing acrimony and litigation between parents regarding the interaction of the parenting plan and the amount of the child support order.

In addition to Section IV and the Task Force’s comments, the remainder of the Guidelines include numerous specific references to orders where a deviation might be warranted, including:

The 2017 MA Guidelines: Prodding Judges to Deviate from the Guidelines More Often

The Task Force expands on this principle in its Guidelines comments:

The Task Force included Principle 5 regarding deviation to highlight that, where appropriate, the Court should deviate from the presumptive child support order amount and that attorneys and litigants should offer reasons as to why a deviation may be warranted. In making this change, the Task Force acknowledged the sentiments expressed by attorneys and litigants that there may be hesitation by the Court to deviate from the presumptive child support order.

The concern over the failure of judges to exercise their authority to deviate from the Guidelines was further discussed in the lengthier Report of the 2016-2017 Task Force, which stated: 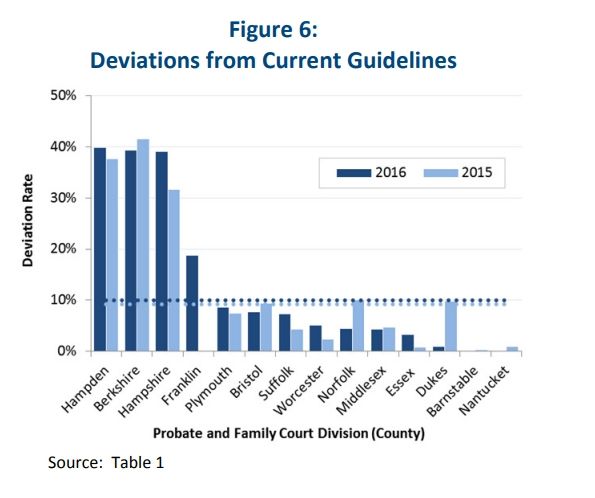 South Shore family law attorneys, the lawyers in our office were astonished to see how frequently Western Massachusetts judges deviate from the Guidelines compared to the rarity of deviations in our local courts in Plymouth, Norfolk, Barnstable and Bristol counties. (The notion of judges deviating from the Guidelines in 40% of cases is simply foreign to attorneys who practice in the eastern parts of Massachusetts. We would love to hear from attorneys in Western Mass about how this works.)

The detailed explanation on the deviation data in the Economic Report is interesting enough to reproduce at length below:

The data for 2015 and 2016 show similar patterns for the overall number of cases and frequency of deviations. There were roughly the same number of cases in each year across all 14 counties: 37,586 cases in 2015 and 38,171 cases in 2016. In both years, the most cases were in the most populous counties (Middlesex, Worcester and Essex) but the highest deviation rates were in counties with smaller caseloads. In both years, the three counties with the highest proportion of deviations by far were three counties in western Massachusetts (Berkshire, Hampden and Hampshire), with deviation rates of between 30 and 40 percent. These deviation rates are significantly higher than the rates in other counties, all but one of which were less than 10 percent in each year. On average, Massachusetts Courts deviated from the current guidelines in only 9 percent of cases in 2015 and 10 percent of cases in 2016. The median deviation rate (the middle rate, eliminating the effect of high and low outliers) was just 6 percent in each year. ….

The 2015-2016 deviations data did not include information on the direction or dollar amount of deviations. However, that information was part of the deviation data collected for the last quadrennial review in 2012-2013. It showed mostly downward deviations (reducing the amount of child support from the presumptive guidelines amounts) by only small dollar amounts. Approximately two-thirds of deviations reported in 2012-2013 were downward deviations from the guidelines amounts by less than $10 per week. The same pattern is likely true for current deviations as well, since the most 2015-2016 deviations are in western Massachusetts counties with below-average median household incomes (see Table 23 and Figure 24).

The relatively low deviation rates observed on average and in most of the 14 counties, coupled with the likely low dollar value of the underlying deviations, means judges in Massachusetts think the presumptive amounts under the current guidelines are sufficiently appropriate in most cases to not require alternative findings and amounts. Thus, the deviation data in isolation did not indicate a need to significantly revise the current guidelines. Importantly, the Court not deviating is not the same as a deviation not being economically appropriate or being overlooked. Looking forward, more specific deviation data will be required for the next quadrennial review. Revisions to federal regulations give special attention to evaluating guidelines’ impact on low income situations.

How Do the 2017 Guidelines Treat Complaints for Modification of a Prior Order that Deviated from the Guidelines?

Upon a request for modification of an order that deviated from the guidelines at the time it was entered, the Court shall apply the existing deviation to the modification action if:

1.) the facts that gave rise to deviation still exist; and

2.) deviation continues to be in the child’s best interest; and

3.) the guidelines amount would be unjust or inappropriate under the circumstances

However, the following section notes that Section III (B) “does not preclude deviations based on other grounds”. The Task Force explained the new language as follows:

The Task Force refined the language to clarify that if circumstances that resulted in a deviation are still in existence during a modification action, those circumstances shall be considered to remain even though it may be appropriate to modify the existing order. For example, a child may have a medical condition that results in ongoing, extraordinary medical expenses and the existing child support order deviates from the guidelines amount. The recipient is now unemployed and files a complaint for modification. The underlying circumstances for the existing deviation remains; however, the Court also considers the additional circumstances.

In short, the mere fact that the reason for the original deviation remains in place won’t prevent a Court from modifying child support if new, additional evidence warrants a change for another reason.

Will Massachusetts Judges Heed the Call of the Task Force and Deviate More Often?

Old habits die hard and it is difficult to say if judges in busy counties will take up the call to deviate in more child support cases. What seems clear, however, is that the 2016-2017 Task Force hopes that many judges will address “hybrid” situations by deviating from the Guidelines, rather than robotically choosing between “primary” and “shared” custody calculations.