Recent changes in federal law mean that a divorced spouse cannot begin collecting Social Security benefits (as a former spouse) until the worker-spouse retires and begins collecting Social Security benefits. In a divorce, spouses who have been married at least ten years are often entitled to a spousal (or ex-spousal) benefit equal to 50% of the worker-spouse’s Full Retirement Age (FRA) benefit, adjusted for reductions if the ex-spouse is under his or her own independent FRA. You can calculate your own or your spouse’s FRA at the Social Security Administration’s Retirement Planner page. Until recently, the spousal benefit was available to the ex-spouse, at his or her discretion, so long as the worker-spouse had reached federal retirement age. In other words, the former spouse benefit was not contingent on whether the worker spouse was actually collecting benefits. However, in November 2015, with virtually no advance warning – in addition to a total lack of public government review and congressional hearings – some of the biggest Social Security changes in three decades came into immediate effect, directly impacting divorce nationwide. Specifically, rules for claiming benefits, including former spouse benefits, were changed to dramatically limited the options for former spouses seeking the benefit after a divorce.

The changes will directly impact how both spouses in a divorce (that is, the worker-spouse entitled to benefits and the soon to be ex-spouse entitled to a spousal benefit) negotiate for spousal maintenance or alimony and how the parties anticipate future income derived from Social Security benefits. Now, considering trade-offs in Social Security claiming strategies is an additional, necessary part of divorce negotiation. Often, trade-offs have their own costs associated with them, potentially increasing the cost of your divorce.

Prior to the Bipartisan Budget Act of 2015, ex-spouses had the ability to anticipate making independent elections regarding the timing of filing for their share of the worker-spouse’s benefits. Divorced parties, each independent of the other, had their own respective qualifications to meet before they were eligible to file a claim. Especially relevant was that prior to the new changes, an ex-spouse was entitled to file a claim based on the ex’s (the worker) benefit without consideration of the worker’s current filing status. That entitlement exists no longer. Now, in order for the ex-spouse to file a claim based on their ex’s benefit, the ex-worker spouse him or herself must also be actively collecting benefits. 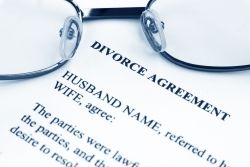 A divorce agreement should specify when the working spouse will begin collecting benefits.

What that means, in simple terms, is that an ex-spouse must wait until the worker-spouse collects benefits before the ex-spouse can claim any spousal benefit they might be entitled to. This creates an environment wherein the worker spouse can unilaterally choose to delay retirement (collecting benefits) which could maximize his or her own benefit, but there is no reciprocal benefit to the waiting former spouse – since the spousal benefit will never increase beyond the worker-spouse’s FRA benefit. Perhaps even more disturbing, the new rules effectively allow the worker-spouse to hold the ex-spouse at his or her mercy regarding the availability of benefits; the worker-spouse can, for whatever reason or no reason whatsoever, actually block the ex-spouse from receiving benefits by simply electing to not collect benefits themselves. It’s no secret that marriages often end riddled with animosities and a desire for “revenge”, and these new rules offer the opportunity for just such behavior.

Negotiating Social Security benefits now requires considering the respective birth dates and FRA’s of both parties and aligning them. Determining the FRA of each spouse is the threshold consideration; then each spouse must commit to a specific time for collecting the benefits or make trade-offs using alternate marital assets – hence the need for further negotiation. These agreements must then be specified in your Separation Agreement to be enforceable.

About the Author: Carmela M. Miraglia is a Massachusetts family law attorney for Lynch & Owens, with offices in Hingham, Massachusetts and East Sandwich, Massachusetts. She is also a mediator for South Shore Divorce Mediation.