Massachusetts attorney James M. Lynch reviews the power of the President to use a recess appointment to place Merrick Garland on the Supreme Court.

Since the election of Republican Donald Trump to the presidency, it has been suggested in some quarters that President Barak Obama should use his constitutional power of recess appointment to place his nominee, Merrick Garland, on the Supreme Court of the United States (SCOTUS).

Judge Garland, the chief justice of the D.C. Circuit Court of Appeals, was nominated by President Obama, in March 2016, to succeed Justice Antonin Scalia, who died on February 13, 2016. Republicans, who hold the U.S. Senate – the body charged with the constitutional responsibility of confirming (among other appointments) SCOTUS nominees – have stalled the Garland appointment by refusing to hold hearings on his confirmation. With the 2016 presidential election behind us, it is clear that the next SCOTUS nomination will be sent to the Senate from a Republican president. Unless, of course, President Obama is able to place Judge Garland on the Supreme Court through a recess appointment. However, a Supreme Court case decided in 2014, National Labor Relations Board v. Noel Canning, et. al., makes clear that President Obama does not have the constitutional authority to recess appoint Garland in the face of determined Senate opposition.

What is a “Recess Appointment”?

President Obama is being urged to invoke Article II, Section 2 of the United States Constitution which provides: 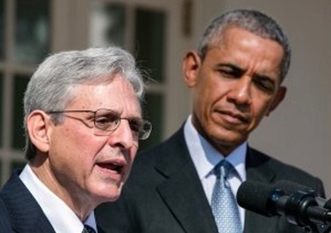 sident shall have Power to fill up all Vacancies that may happen during the recess of the Senate, by granting Commissions which shall expire at the end of the next Session.

Recess appointments are temporary, however. Any appointment made during the administration transition would expire at the end of 2017. There has been at least one Supreme Court recess appointment in the past: Justice William J. Brennan was a recess appointment when he was named shortly before the 1956 presidential election by Dwight Eisenhower, a Republican president who felt that the appointment of a Northeastern Roman Catholic would strengthen his re-election chances. Brennan’s appointment, however, was popular with both parties, and he was confirmed in 1957 with only one senator (Joseph McCarthy) voting in opposition. (In contrast, Judge Garland has no chance of confirmation in advance of the change of administrations.)

There was no Supreme Court case law interpreting what constitutes a “recess of the Senate”, a term that the Founding Fathers did not define in the Constitution, until 2014, when SCOTUS handed down the decision, National Labor Relations Board v. Noel Canning, et. al. The recess period at issue in Noel Canning fell within the end of the Senate session in December 2011, and commencement of the new session in January 2012. The question before the Court in Noel Canning was whether President Obama could make recess appointments during this period, despite the Senate scheduling pro-forma sessions throughout the annual break.

The three recess appointments made by President Obama were eventually challenged by Noel Canning, a Pepsi-Cola distributor. Canning argued that he aggrieved by a decision of the 5-member NLRB, which included those 3 appointees. Specifically, Canning argued that President Obama lacked the authority to make the recess appointments to the NLRB that led to the adverse ruling against Canning.

The Key Phrase: “The Recess of the Senate”

In Noel Canning, the Supreme Court examined the scope of the phrase “the recess of the Senate”, noting that the 2-year life of each elected Congress typically consists of two formal 1-year sessions. Each session is separated by an “inter-session recess”, in which the Senate or the House of Representatives will “adjourn sine die”. In short, this means that annual sessions are scheduled without announcing a specific date to reconvene the next formal session.

The Court then addressed the word “recess” by examining Founding-era dictionaries and determined its usage to be the same as it is today – e.g., ”a period of cessation from usual work” and a “remission or suspension of business or procedure”. The Court observed that while “the use of the word ‘the’ in ‘the recess’ might suggest that the phrase refers to the single break separation formal sessions of Congress … we believe that the Clause’s purpose demands the broader interpretation” of including both inter and intra-recesses. (It makes no difference, the Court held, which words the Senate uses to signal its departure.)

In Noel Canning, the Court established that a president can make appointments in the midst of recesses that occur during (“intra”) Senate sessions, as well as during breaks occurring between (“inter”) Senate sessions. Next, the Court turned its attention to pro forma sessions. Pro forma sessions of are purely procedural; no work is actually performed during such breaks. Indeed, the purpose of apro forma session is to prevent a president from making recess appointment by scheduling a place-holder session.

The question before the Court was thus: can the Senate meet in pro forma sessions every three days in order to defeat a president’s plan to make recess appointments? The Court answered ‘yes’ and rejected the argument that pro forma sessions were a sham whose sole purpose was to deny recess appointment power to the president. All that matters, the Court held, was whether, under its own rules, the Senate retains the capacity to transact Senate business in such sessions:

This standard is consistent with the Constitution’s broad delegation of authority to the Senate to determine how and when to conduct its business, as recognized by this Court’s precedents [citations omitted]. Although the Senate’s own determination of when it is and is not in session should be given great weight, the Court’s deference cannot be absolute. When the Senate is without the capacity to act, under its own rules, it is not in session even if it so declares.

We therefore conclude, in light of historical practice, that a recess of more than 3 days but less than 10 days is presumptively too short to fall within the Clause. We add the word “presumptively” to leave open the possibility that some very unusual circumstance–a national catastrophe, for instance, that renders the Senate unavailable but calls for an urgent response–could demand the exercise of the recess-appointment power during a shorter break.

Some legal scholars suggest that the above language is merely “dicta” – an expression that goes beyond the facts of the case and, thus, not binding as legal precedent in subsequent cases. They maintain that the central issue decided in Noel Canning was about whether pro forma sessions were constitutionally valid and that the language relating to the length of the recess is not necessary to the Court’s holding. This is a hard position to defend, however, since the 3 NLRB appointments occurred during a 3-day intra-session recess between pro forma Senate meetings. By striking down the President’s NLRB appointments made during a 3-day Senate break, the Court clearly also determined that the length of the break was not sufficient to invoke the Recess Clause – a determination that was central to their holding and, thus, not “dicta”.

Will this Senate Block a SCOTUS Recess Appointment by President Obama?

The takeaway from the Supreme Court’s unanimous Noel Canning ruling is that a motivated Senate majority can defeat virtually any president’s recess appointment – including the hypothetical recess appointment of Judge Garland – by meeting inpro-forma sessions every few days. That is precisely what the Republican-controlled the Senate has been doing since Justice Scalia’s death in February 2016, including the months of August and October, when it convened every 3 days.

From this year-long pattern, it seems clear that GOP Senate Majority Leader Mitch McConnell won’t create any daylight for President Obama, and that the next SCOTUS appointment will come from the incoming President.

About the Author: James M. Lynch is a Massachusetts personal injury attorney and divorce lawyer for Lynch & Owens, located in Hingham, Massachusetts.